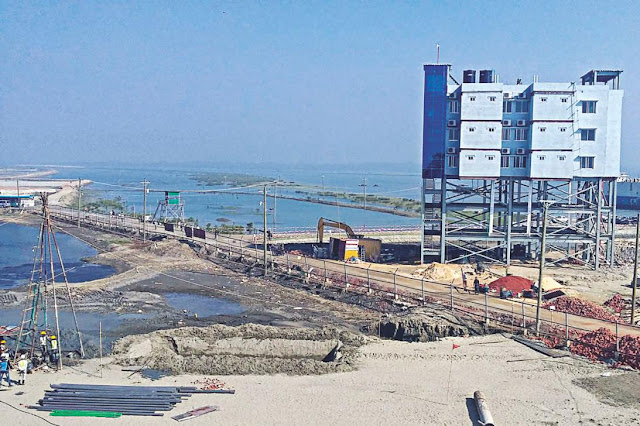 Matarbari is a small offshore island under Cox's Bazar District of Chittagong Division of Bangladesh. The island is surrounded by Kutubdia Channel, Bay of Bengal and Kohelia River. The Matarbari island is divided into two administrative units of local government namely Dhalghata Union and Matarbari Union. The total population of the island is 57,814 and average density per sq. km. is 1,991 but the scenario of Dhalghata is quite tough with a density of 6,471 per sq. km. (BBS, 2014). Major occupation of the people are salt cultivation, agriculture, shrimp culture and fishing from the Bay of Bengal. Total land area of Matarbari Island is 29.03 sq. km. (7,176 acres). Out of the total area Dhalghata has only 494 acres of land while Matarbari has 6,682 acres.


A Japanese consulting farm TEPSCO with cooperation of JICA Study Team conducted the Environmental Impact Assessment of Matarbari Coal Power Plant and submitted their report to Department of Environment (DOE) in June 2013, only 5 days after the approval of ‘Terms of Reference (TOR) circulated by DOE. After evaluation of EIA Report and a number of visits to the area the Bangladesh Working Group on External Debt (BWGED) is expressing its concerns as a initial observation. 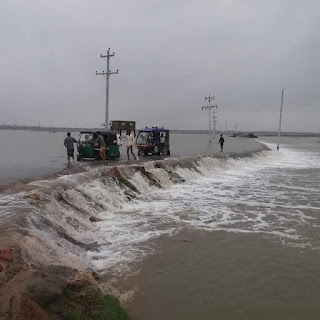 Artificial Water Logging: At least 10 thousand inhabitants of the island has been suffering from artificial water logging for more around 2 months (since 5 June 2018) after two days of heavy rain because the coal power authority closed 8 sluice gates among 10 and other 2 have been closed by existing shrimp farm owners. The power plant also blocked natural water channel of Rangakhali Khal. In a discussion with Japan Centre for Sustainable Environment and Society（JACSES), the financing agency, JICA, denied to take any responsibility for this water logging saying that the water logging is a regular phenomenon of Matarbari Island. But the EIA report didn't mention any past evidence of water logging in the area. The people are living in totally inhumane situation while the responsible agencies are playing dirty game of avoidance.

Displacement: Due to land acquisition for only Matarbari Coal Power Plant (CPGCBL-JICA) around 20,000 people have been displaced from their home and occupation. Number of displaced families from own home is quite lower (# 94) because the government took mostly agricultural land and shrimp farms for the project. As a result, sharecroppers, salt farmers, crab farmers, agricultural labours and fishermen are displaced brutally from the area. Total number of occupationally displaced people are 20,534 in which salt farmer 9,929, shrimp farmer and worker 7,290, crab farmer 375 and fishermen 2,940 (Azad, 2018).

Inadequate Compensation: The Acquisition and Requisition of Immovable Property Ordinance (1982) of the Government of Bangladesh does not mention any compensation for direct and indirect dependent individuals of land except the land owners. As a result, those that are dependent on land but are non-title holders are not legally recognized to receive compensation, which is contrary to the principles of international acquisition policies and rules. 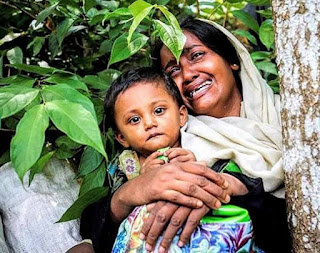 Faulty Assessment of Compensation: Determining compensation according to the average selling price of previous 12 months has led to land owners getting less compensation from the actual market price of the land. Usually, people record lower than actual price while buying land in official documents to pay smaller registration fees and taxes. While considering this average price as compensation, the amount becomes lower than the actual market price. A comparison of compensation and market price is given bellow:
Time Consuming Process of Compensating: The lands were taken from local people for power plants in 2013 while they were paid in 2016 only after formulation of the Resettlement Action Plan. The affected people were living in rented house for three years. But the project authorities didn't pay any compensation for this three years. Besides, the project-affected people have to face many complexities to collect necessary information/ documents in order to prepare compensation file for withdrawal of compensation. In addition, due to different types of irregularities in compensation process, they did not get their compensation in due time.

Absence of Rehabilitation: No rehabilitation plan has been implemented till now although the people was displaced four years earlier. 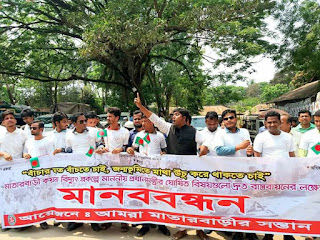 Faulty Public Consultation: There were terms and conditions for local and national level public consultation for the Matarbari project in the site clearance letter, but there is no mention about national public consultation in the EIA report. Public opinion-taking process at the local level was also faulty. Two stakeholder meetings mentioned in the EIA were not held in the project area. The minutes of the meeting attached in the EIA report did not incorporate views of all participants. In these stakeholder meetings, the respective authority did not display information about the project, especially about the negative impacts of the project.

Public Participation Denied: There were a very few people were invited and attended the consultation meetings. Even who were participated claimed that their comments were not written in meeting minutes which were attached with the report. In addition, powerful political party leaders and administration had threatened to file cases and take legal actions against those who opposed the power plant.

Violation of Procedures: The EIA report was submitted for approval to the DOE only 5 days after the approval of ‘Terms of Reference (TOR) circulated by DOE. Similarly, the first stakeholder meeting for Matarbari EIA was held before the approval of TOR. According to the local people, it was pre-decided that the power project would be established in the places and rest of the procedures were mere formality. Land acquisition was completed and handed over to the implementing agencies by evicting land and shrimp farm owners without giving prior notice as required under section 6 and 7 of the Land Acquisition Act 1982. 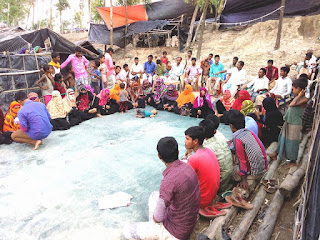 Faulty Labor and Influx Management: The EIA report assured maximum employment in the power plant for the local people. It is already proved that employment facilities in coal-fired power plant are only available for the technically equipped persons. For this reason, the power plant will not be able to provide employment for a large number of unemployed people who lost their employment due to land acquisition. Even one of the affected people has not been provided employment opportunities till the date except a few number of daily labors in construction work (Cox's Bazar News, 2018).

Conflict of Interest: The Environmental Impact Assessment (EIA) Report of Matarbari Coal Power Plant had been conducted by a Japanese company named TEPSCO with cooperation of JICA Study Team. There are high possibilities of Conflict of Interest in the process of EIA. As JICA Study Team worked directly with TEPSCO with due credit in the report, it is highly possible that the report is biased in favour of JICA.

Violation of Law by Approving the EIA: Matarbari is an island in the Bay of Bengal and highly populated area (6,667 per km2). According to the Environmental Conservation Act 1995 (amendment 2010) and EIA Guideline for Industries 1997, any industry under Red Category is totally prohibited in the populated or human settlement area. Besides there were a good number of mangrove species at seashores of Matarbari which are under Forest Department. But the Department of Environment (DOE) did not seek any opinion from the Forest Department in approving site clearance of this project.

Ignored Natural Canals: There are a number of canals and creeks in the Matarbari and Dhalghata Union. But the EIA Report doesn't mention any water channels in the islands.

Economic Interest Superseded Environment and Human Sufferings: Two locations (Hoyanok and Matarbari) were selected in the Preliminary Study for Matarbari Coal Power Project. Socioeconomic and Environmental impact in Hoyanok was lower than Matarbari-Dhalghata area. But Matarbari was finally selected considering technical and economic conveniences. According to the local people, more importance was given to costs and benefits of the project during site selection than the environmental or socioeconomic risks. Contrarily, Bangladesh National Conservation Strategy (2016 - 2031) stated that "the strong tidal and wave force of marine waters as well as the force of seasonal trade-wind along the coast also offer huge potential for renewable energy generation (Shamsuddoha and Islam, 2016).

Pollution of Ash: According to the EIA report of Matarbari Coal Power Plant, 20% ash will be generated after burning coal. To preserve this ash, a pond across 183 acres land area is supposed to be dug. According to local people, if not appropriately controlled, flying ash will create a disaster in the surrounding area. Besides the ash pond in the cyclone and flood prone area will pollute soil and ground water by mixing up with rain water and spreading beyond the plant area.

Ecologically Critical Area: The project is situated within 14 km north from Sonadia Island which is an Ecologically critical area (ECA) which is also a vital route of migratory birds from Northern and central Asia to Southeast Asia.

No Information Disclosure: Although it is a public project there are no information available on project implementation, budget, evaluation process, Even the project profile has not been disclosed in public domain both from the JICA or Bangladesh Government's part.